PRICES ON THE RISE

Oil, along with the Russian/Ukrainian war, continues to be the main news.

In March it reached a maximum of 139.13 USD/barrel and some analysts dared to predict in the short term that it would reach 200 USD.

We would have to go back to 2008 to find such a high price level.

However, the announcement by different countries of the release of 60 million barrels of their crude reserves seems to have had an effect and the price has begun to fall and is already on its way to 100 USD/barrel.

In the month of March, the average price reached by Brent was 112.46 USD/barrel. 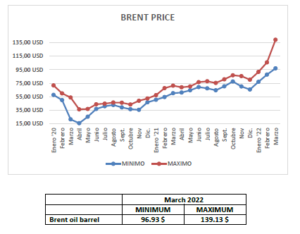 If there are no changes in the current dynamics, the price in 2022 may end up being higher than in 1995.

Demand in April is expected to be good and a greater or lesser increase in the price of PET will be highly conditioned by the price of raw materials and energy costs.

As has been seen, in the spot market the price of PET has already exceeded 1.8 €/kg and for April some producers have already announced increases of more than 50 €/ton. 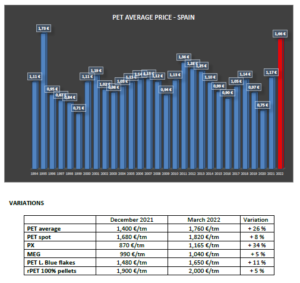 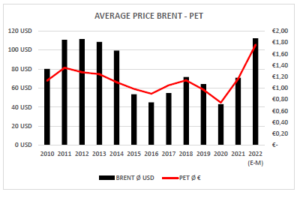